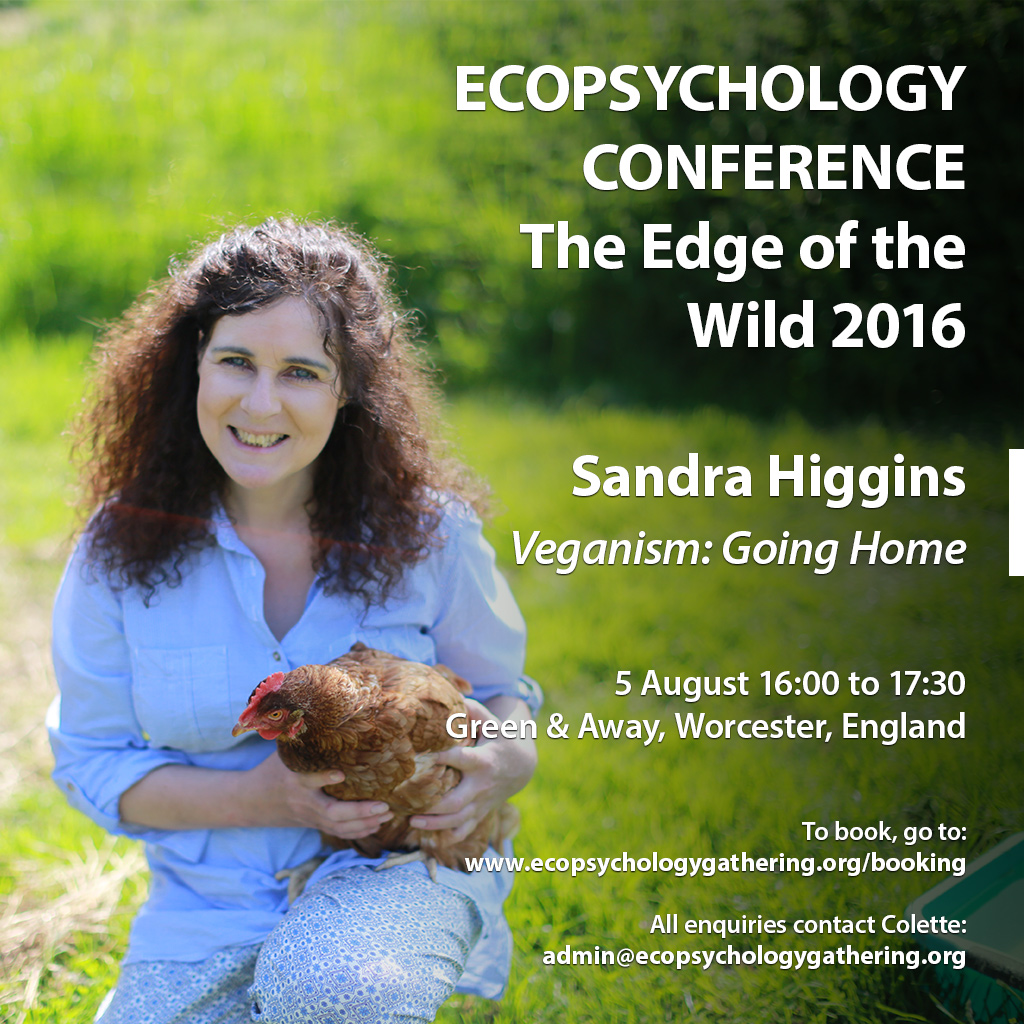 Sandra Higgins will give a workshop on “Veganism: Going Home” at the forthcoming Edge of the Wild Ecopsychology Conference, Worcester. Click here to book.

We have an innate capacity for empathy and compassion that enables us to resonate with how others feel, even if they are different to us, and to act in ways that prevent their unnecessary suffering. These capacities are the cornerstone of social justice. They are what unites us with all of life and with the earth that sustains us. Yet, we lose these capacities towards non-humans as we grow from childhood to adulthood. There is no ingredient in the lives and bodies of non-humans that humans need for their health or wellbeing. Therefore, we use other animals for reasons of taste, tradition, and convenience. For these trite reasons, we cause billions of other lives to suffer and die horribly and unnecessarily every year. Thus, by living as non-vegans, we participate in the most violent acts that have ever been perpetrated on this planet both in degree of intense suffering inflicted and in the number of victims harmed. This violence is not congruent with the values that we claim to hold dear or with our nature. By living as non-vegans we live according to myth rather than reality, disconnected from our home as part of the natural world. This workshop will explain how and why this happens, illustrating how our inherited speciesism dates from a relatively short time in the history of human evolution. The workshop will explore the consequences of disconnection from the earth and from other forms of sentient life for ourselves, for others, and for the planet. It will conclude by demonstrating how we can reconnect with our true nature by being vegan, and how this reconnection has the power to alter the evolution of the human species.

How the workshop explores the ‘Heartlands’ theme

Humans share this planet, its land and its nature, with billions of other species. When we move beyond the egoic, human ‘I’, we see that every life matters, and matters equally. Human nature appears to be inherently empathic, compassionate, altruistic and good. But when we examine our relationship with the non-human world it is clear that we have assumed an unnatural and false position of superiority. We have become speciesist beings, living lifestyles that are predicated on behaviour that is narcissistic, lacking in empathy, exploitative, destructive, and violent. Our apparently benign, socio-culturally sanctioned choices have consequences for others that are so violent that they are carefully hidden from us by those who profit from them. By a process of cultural inheritance, we lose our natural childhood connection to our own animal nature, becoming so desensitised so that we consume without conscience. As a result, every year we unnecessarily breed, torture, and kill billions of other animals. Historically, they are older species than us. They were once free, autonomous, survivors in the wild. Our domination of them occurred a very short time ago in the history of human evolution. Since that time we have created havoc with the natural world causing species extinction at a rate that is thousands of times greater than the natural, pre-human rate. We are destroying the very earth that every living being depends on for survival. This fact weighs heavily on the psyche. One of the most significant contributors to environmental destruction and climate change is animal agriculture. Veganism is a way of living peacefully, in harmony, and respectfully with others, avoiding unnecessarily exploiting other sentient beings. By bearing witness to the truth that others experience as a consequence of our lifestyle choices, we can begin to live according to reality instead of myth; we can begin to live in alignment with our values and our true nature. By eliminating the greatest cause of natural destruction we can begin again to embrace our Home. By recognising our own animal nature we can stop harming them, and begin to relate to them as different, but equal earthlings with whom we share our Home.

Sandra Higgins, BSc (Hons) Psych, MSc Couns Psych, MBPsS, is Director of The Compassion Foundation of Ireland. She has a special interest in the practical application of the non-violent philosophy of veganism in clinical settings. She studied Pure Psychology at The Open University, and at Trinity College, Dublin where she obtained an MSc in Counselling Psychology with Distinction. She also trained at The Positive Psychology Centre, University of Pennsylvania, The Human Animal Connection Unit at The University of Denver, Colorado, and The Institute for Humane Education, Maine, United States. Sandra is a Certified MB-EAT Instructor (Mindfulness Based Eating Awareness Instructor) and Intuitive Eating Instructor and has trained in working with Trauma & Dissociation with the UK ESTD (European Society for Trauma & Dissociation). She is also a Schema Therapy practitioner.
Sandra’s previous presentations include Neuro-Psycho-Social & Neuro-Cognitive Models of Complex Post Traumatic Stress Disorder at Psychology Conferences in Ireland, the UK, Europe and the Australasian Traumatic Stress Society. She gives regular workshops on Veganism & Compassionate Living and is an active member of In Defense of Animals (IDA) List of Therapists. She is the author of The Power of Compassion (2nd ed) in Halpin, M (2014) How to be Happy & Healthy, The Seven Natural Elements of Mental Health, Ashfield Press: Dublin. Sandra runs Go Vegan World, the first abolitionist public advertising campaign in Europe, now expanding across the world. She founded Ireland’s first vegan sanctuary, Eden Farmed Animal Sanctuary Ireland, which is home to more than 100 non-humans who have been rescued from use for food.